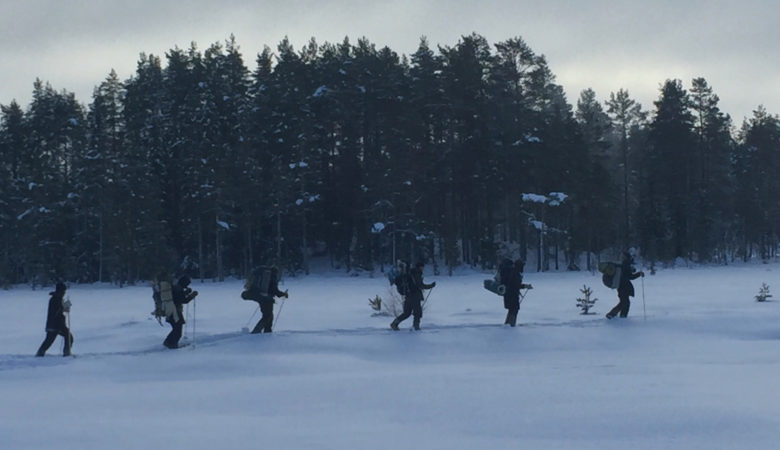 Becoming Wolf was the topic of this guardian intensive training. The mission was to learn about wolves in general, and especially protect the wolves in this particular area we went to from illegally being hunted.
The area a little north of Mora, Sweden is a small part of a much bigger area, where wolves seem to disappear. It is even called a “black hole” by some.

The idea was, that people being out in that area, watching the wolves closely, could scare off the poachers and keep the wolves alive a little longer. Also collecting pee and poop samples to send into an official wolf tracking database can even help keep track of individuals as well.
At the same time, the training was still also a guardian intensive training. This means, that all people involved would be forced out on their edge. Challenged to question ideas about limits of what is possible – physically and mentally. Facing challenges in the process of working together as a group, having both intrapersonal and interpersonal conflicts, and learning to deal with them as quickly as possible, in order to function again and be able to live comfortably, surrounded by discomfort.

The discomfort in this case was high snow, heavy backpacks that needed to be carried all day every day, on skis, in intensely cold weather, and sometimes challenging areas with little water and little usable firewood.

But 7 courageous individuals set out to face that challenge. Their self-chosen guardian names being Breathe, Snow, Crow, Blood, Bear, Vocal and Mouse Weasle. Three guides, four trainees, but as is the Guardian Way, all of them were actually trainees, since for the Guardian, life is training and training is life. The nights before the start of the training the cold had already started to set in, being around -24°C at night in the area of the base camp they had planned to start from, and even colder in the area the immersion was to take place. The snow that was at best about knee-deep, at worst going to the waist or higher (when sinking all the way into a ditch), was creating an additional challenge to the newly formed pack. Forcing them to find skis or snowshoes in order to even attempt to succeed in the mission they had set out for.

But wolves travel a lot in one day, covering huge distances, even in deep snow. So the first challenge was to get used to the new mode of traveling in deep snow, on skis, with heavy backpacks, through thicket and a lot of elevation changes. All of those conditions are no problem for wolves, but add up for humans quite a lot.

Also getting used to the cold temperatures, the new area, needing to find water sources at least once during the day as well as in the evening around a camp spot was coming in as close second, only a few hours into the immersion.

It was therefore pretty helpful, that even the participants were all quite experienced in certain wilderness skills already, having learned how to make a fire using friction (bow drill), collecting firewood, and sleeping outside. The first few suns were focused mainly on getting used to this new situation and surroundings. Already showing certain struggles of some pack members. Showing the strength of the pack as a whole on how they deal with slow or challenged pack mates. How tasks are distributed, and how to function best, taking all the limitations into account.

A different kind of training

Most trainings that are designed to bring you to your edge are mainly focused on the individual. But we are, as humans, social animals. So even more important than an individual’s strength is the strength of the group.

Being faced with the challenge of a pack member not being able to carry their backpack due to severe pain, it was on the others to distribute the burden in order to continue on the mission. Being out on your edge or even going over it now and then doesn’t mean that you have to shoulder the burden alone. All too often we are taught in our society, that we need to fight, that we are on our own, that we are not good enough and that we failed if we can’t do something.

The Guardian Way – at least how we understand and promote it – is different. Being on your edge doesn’t mean at all, that you are left to your own devices.

It rather means, that you will be challenged, while at the same time having a group, a pack that supports you in your growth. They might not take over your task, but they will make sure you have enough support and strength that you can overcome your challenge, learn and grow. And this is what was shown so beautifully in this past experience.

People taking over the burden of the backpack, while not letting the person quit so easily either. Them learning to continue with the amount of challenge they could handle, still needing to follow the rest of the pack through the deep snow, learning to track wolves in varying conditions of snow and surrounding. And learning to deal with other stress factors coming up.

So what happened with the wolves?

Well, we followed a pack of 4 wolves, 2 adults , 2 pups (almost a whole turn of the seasons old) for the whole experience of 2 weeks. First following tracks that were about 4 suns old, until we hit fresher tracks, at one point even having one of the pups checking out our tracks from the past sun! We found a lot of pee and poop, a kill site of a roe deer, lays, a playground, an exploration area, and even a pee spot with moon-blood, showing that we were right on time for the mating season.

We learned how they travel in circles, coming back to the exact same spots more than once, picking the same areas for hunting, and so much more.
We were able to get to know them not simply as wolves, but individual pack. Observing where they would get out on a road to get ahead faster, where they chose the thicket, and where they would avoid the deep snow. It was a truly fascinating story unfolding in front of our eyes, and we had the best seats in the house so to speak.

The cold weather also posed quite the challenge. Learning to stay warm, especially in your fingers and toes, both during the day, as well as throughout the dark hours of the night, is a very crucial aspect of survival in such conditions. A few days you can do just fine with the discomfort, but when you notice more severe signs of frost-related symptoms, it’s time to learn about wilderness self-care.

You learn how to keep dry and warm, or at least as much as possible; build up routines to keep clean, to dry your things while making sure they don’t burn around the fire, and figure out tricks to stay warm throughout the night. These might seem mundane skills for some, but having lived it, you learn about the importance – and relief – that mundane tasks bring.

This was a short glimpse of our immersion experience. More stories will emerge over time. For now, however, we would love to know what parts of the story resonated for you. And maybe even what aspects would draw you into joining a similar experience and why.

here are some impressions of the immersion: 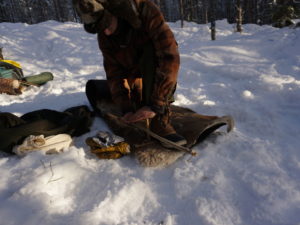 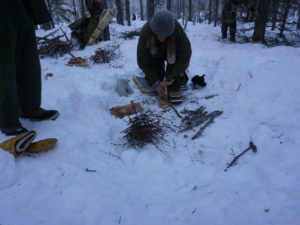 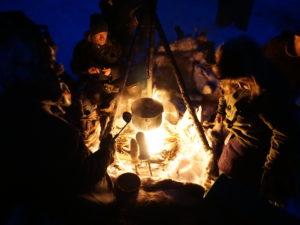 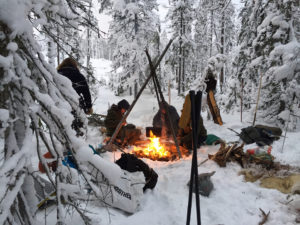 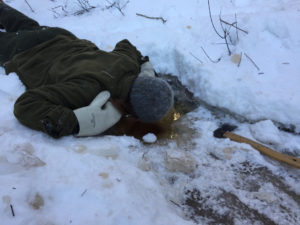 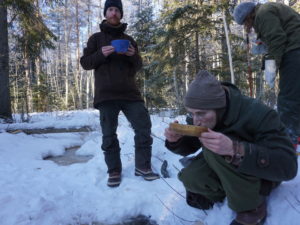 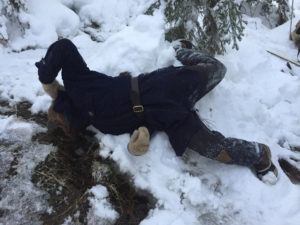 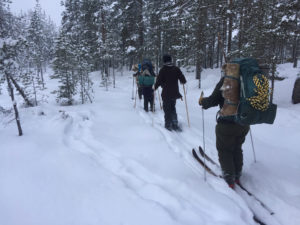 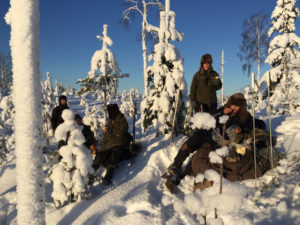 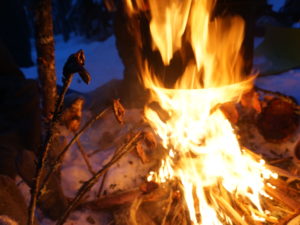 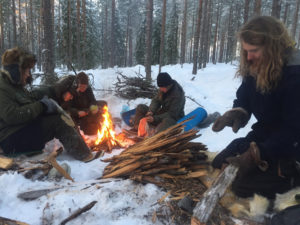 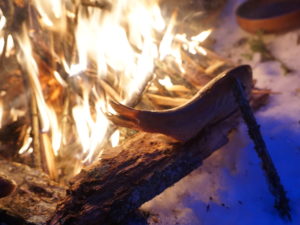 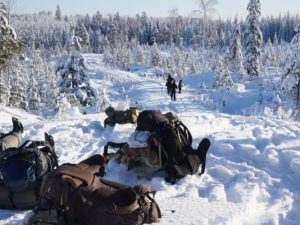 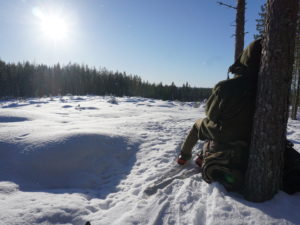 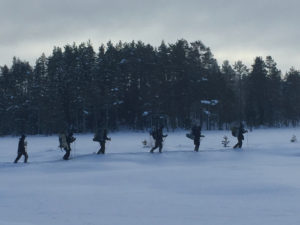 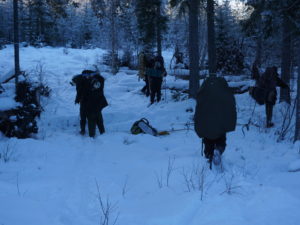 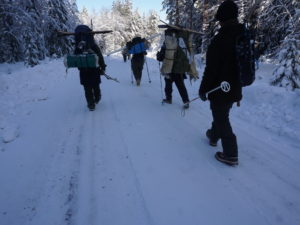 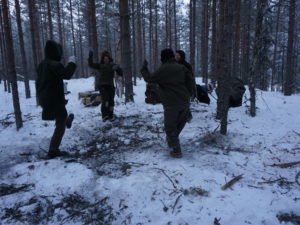 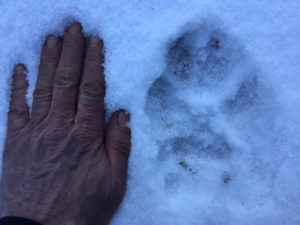 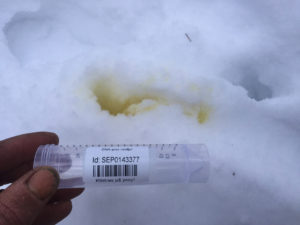 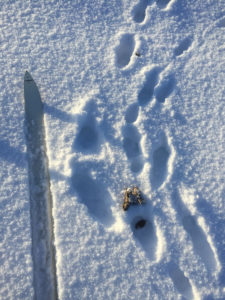 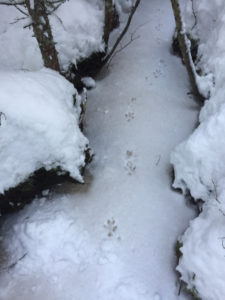